Piedmont’s name means “foot of the mountain” and it aptly describes Piedmont’s location near the Alps, just east of France and south of Switzerland. For admirers of Nebbiolo wines, Piedmont is Italy’s most exalted region, since it is home to Barolo and Barbaresco. Barolo and Barbaresco are names of towns as well as names of the two most prestigious Piedmont DOCGs. Piedmont, with 142,000 vineyard acres, has seven DOCGs and fifty DOCs, the highest number of DOCS in any Italian wine zone. Despite its relatively northern location, its sometimes cool and frequently foggy weather, Piedmont produces mostly red wines. The Nebbiolo grape thrives in this climate and in fact takes its name from the Italian word for fog, “nebbia.” With its rich buttery food, majestic red wines and complicated vineyard system, Piedmont is often thought of as the Burgundy of Italy. As in Burgundy, Piedmont vineyards generally have well-established boundaries, and the vineyards are often divided into smaller parcels owned by several families. Though Nebbiolo is considered the most “noble” Piedmont grape, Barbera is actually the most widely planted grape. Dolcetto is the third most common red grape. White wines in Piedmont are made from Arneis, Cortese, Erbaluce and Moscato. Though Barolo and Barbaresco are the stars of the region, the easy-to-drink, sparkling “spumante” and “frizzante” wines of the Asti DOCG are the most widely produced. There are also Piedmont Indicazione Geographica Tipica (IGT) wines that are often an innovative blend of traditional and non-traditional grapes. This relatively new appellation status was started in 1992 as an attempt to give an official classification to Italy’s newer blends that do fit the strict requirements of DOC and DOCG classifications. IGT wines may use the name of the region and varietal on their label or in their name.
356 Items 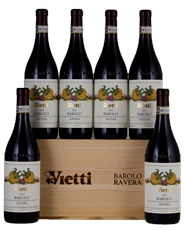