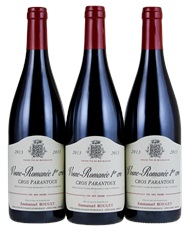 ...great clarity on the nose...with subtle wet limestone and granitic scents emerging with time. The palate is medium-bodied, very “gourmand” in the mouth...lovely meaty note that surfaces on the long finish.

Refined and finely etched. More black fruits and density... Amazing persistence. Resonance is a good word for the impression they leave on the palate.

There are oenophiles who believe that Domaine Leroy produces the greatest wines in the world. The estate was founded in Burgundy in 1868 and today is owned and run by Lalou Bize-Leroy, a dynamo of a woman who represents the current generation of the founding family. Bize-Leroy is famous, among other reasons, for being an early adopter of biodynamic vineyard cultivation, meaning that there have been no chemicals, fertilizers or pesticides of any kind used in the Domaine Leroy production for many decades. The domaine, located in Vosne-Romanee, makes numerous wines, but is renowned for its Grand Crus and Premier Crus. Its Grand Crus are Corton-Charlemagne, Corton-Renardes, Richebourg, Romanee-St.-Vivant, Clos de Vougeot, Musigny, Clos de la Roche, Latricieres-Chambertin and Chambertin. The domaine has a total vineyard area of 56 acres which is planted in Pinot Noir, Chardonnay and Aligote. Production is extremely limited, usually between 10,000 to 20,000 bottles.

Les Beaux Monts is a 28.6-acre Premier Cru vineyard in the Vosne-Romanee appellation of Burgundy’s Cote de Nuits. It is on the northern edge of the appellation, bordering Flagey-Echezeaux. The vineyard has a southern exposure, and the soil is part clay and marl. It is one of the largest of Vosne-Romanee’s Premier Crus. Clive Coates calls Les Beaux Monts “a nice big wine, but nonetheless perfumed, full of finesse, even lush.”

This red wine is relatively light and can pair with a wide variety of foods. The grape prefers cooler climates and the wine is most often associated with Burgundy, Champagne and the U.S. west coast. Regional differences make it nearly as fickle as it is flexible.