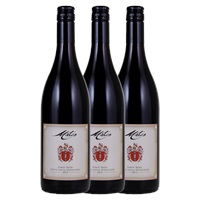 Supple, elegant and generous, with fleshy plum, black cherry and blueberry fruit that is delicate and full-bodied.

Santa Rita Hills AVA in northern Santa Barbara County was granted appellation status in 2001. Located between the towns of Lompoc and Buellton, it has a total area of 30,720 acres with 2,700 vineyard acres. The area is considered a cool climate for vineyards, so vineyards are most often planted with the cool-weather grapes Pinot Noir and Chardonnay. The hills in the western part of this appellation are directly exposed to the Pacific Ocean, meaning that maritime winds and fog make the western edge of the Santa Rita Hills AVA particularly cool. The Sanford & Benedict Vineyard planted in 1971 was the first vineyard in the district and is still considered one of the best.

This red wine is relatively light and can pair with a wide variety of foods. The grape prefers cooler climates and the wine is most often associated with Burgundy, Champagne and the U.S. west coast. Regional differences make it nearly as fickle as it is flexible.