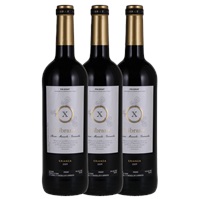 Fragrant nose of lead pencil, earth, black currants, and blackberry liqueur that jumps from the glass. This is followed by a sexy wine with layered blue and black fruits intertwined with ripe tannins and good acidity.

Ribera del Duero is, in the words of wine writer Jancis Robinson and Hugh Johnson, “the modern red wine miracle of northern Spain.” In 2012 Wine Enthusiast magazine named it the international wine region of the year. The appellation is a high, rocky plateau in north/central Spain that follows the Duero River for 60 miles before the river passes into Portugal, where it becomes the famous Douro River, then flows into the Atlantic Ocean. There are more than 60,000 vineyard acres in the appellation and only red wines are produced under appellations regulations. Low rainfall, hot days, many hours of sunlight and harsh winters produce grapes of great depth and flavor. Ribera de Duero’s reputation owes much to Vega Sicilia, a 150-year old estate known both for its excellent traditional red wines and its willingness to innovate with the times. Tempranillo, known locally as Tinto Fino, is the dominant red grape in the appellation, and it is often blended with small amounts of Cabernet Sauvignon, Malbec or Merlot. The highly acclaimed Bodegas Alejandro Fernandez, world famous for its Tinto Pesquera, is also in Ribera del Duero. The appellation status was awarded in 1982.