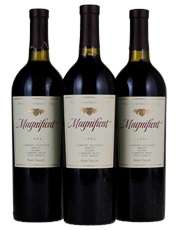 Elegant and sophisticated, a complex blend of flavor and texture--bright, lively cherry, plum and currant flavors and a smooth, supple texture.

Oakville AVA is one of the two or three most prestigious appellations in the United States. Located in the heart of Napa Valley, its 5,000 vineyard acres produce some of the world’s most acclaimed Cabernet Sauvignon, including such California “cult” Cabs as Screaming Eagle and Harlan Estate. Before those boutique producers rose to fame in the 1990s, Oakville was already renowned as home to Robert Mondavi, Opus One and Groth Vineyards, among others. Along with the famous wineries, there are premier vineyards in this AVA, including Martha’s Vineyard and To Kalon Vineyard. To Kalon was first planted in 1868 by H.W. Crabb, one of California’s first viticultural researchers, and he named the vineyard after the ancient Greek phrase for “most beautiful.” Though many grapes can be successfully grown in Oakville, Cabernet Sauvignon is king. Merlot and Chardonnay are also frequently planted. Oakville Cabs are prized for their richness, complexity and weight. Oakville was designated as an AVA in 1993.