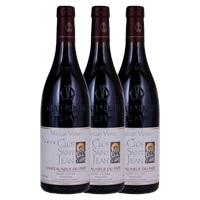 ...incredible notes of blackberry, fig, tree bark, mineral, spice-cake and pepper that flow to a full-bodied, seamless and perfectly proportioned palate. It possesses upward of two decades of longevity... (10/2013)

...lush and velvety in feel from the start, gliding along with enticing plum sauce, melted black licorice and anise-soaked blackberry notes. Hints of charcoal and ganache stud the finish but stay in the background...

Châteauneuf-du-Pape, the appellation, is a large area of nearly 8,000 vineyard acres centered around the picturesque town of Chateauneuf-du-Pape. Located in southeastern France just north of the Avignon hills, the name of the appellation means “new castle of the pope” and it is a reference to the 14th century, when the Popes of Avignon built summer homes in the Southern Rhone Valley. Today the appellation is one of the most renowned in France and its terroir is known for layers of small pebbles, called “galets.” The stones in the soil are thought to help store heat and keep the soil warm, which helps ripen the grapes. The stones also help keep the soil from drying out in hot summer months. In 1923 Châteauneuf-du-Pape was a leader in establishing the idea that AOC wines in France should be made only with specified grapes, and the appellation allowed 13 grape varieties to be used. Since then the rules have been slightly modified to include several more allowable grapes. Red and white wines are produced, though in practice about 97% of all Châteauneuf –du-Papes are reds made with a blend of Grenache Noir, Cinsault, Counoise, Mourvedre, Muscardine, Syrah and Vaccarese. The red wines of this appellation are prized for being big, rich, spicy and full-bodied. White wines of the appellation are made with Grenache Blanc, Clairette, Bourboulenc, Roussanne, Picpoul and Picardin. Whites are floral, fruity and relatively full-bodied.