ITEM 8466199 - Removed from a professional wine storage facility; Purchased from a private collector 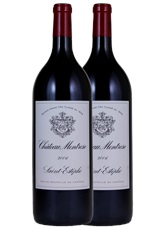 Exhibits stunningly concentrated, sweet blackberry and cassis fruit with hints of flowers and minerals. Full-bodied with a savory, expansive mid-palate as well as sweet, noble tannins...

There's currant, spice, chocolate and berry character on the nose. Deep, complex and full-bodied, with chewy tannins and a long, flavorful finish.

Château Montrose, a Second Growth Bordeaux, acquired its name in 1778, when Etienne-Theodore Dumoulin bought 200 acres in St.-Estèphe. The site, an elevated ridge, was covered in blooming heather and it inspired its new owner to name it “mount rose,” or Montrose. In the 19th century the estate was bought by the owner of Cos d’Estournel, who eventually sold it to his son-in-law, Louis Charmolue. In 2006 the Charmolue family sold the estate to brothers Martin and Olivier Bouygues, French industrialists with major businesses in construction, telecommunications and media. The Bouygues family brought in key new personnel, most recently Hervé Berland, Chief Executive Officer since 2012. Mélissa Bouygues, wife of Martin Bouygues, is Chairwoman. Since 2006 the new owners have spent lavishly on modernizing the winemaking facilities, completing a state-of-the-art winemaking center that includes solar panels and other energy efficient systems. Montrose has 240 vineyard acres planted to 60% Cabernet Sauvignon, 32% Merlot, 6% Cabernet Franc and 2% Petit Verdot. Wine Advocate rated the 2009 and 2010 vintages at 100 pts, with Robert M. Parker Jr. calling the 2010 “a fabulous wine.”

Saint-Estèphe is in the northern Médoc, on the left bank of the Gironde River. Although it has no First Growth estates, its five Second, Third, Fourth and Fifth Growth châteaux are notable, and, in recent decades, have become favorites with reviewers and consumers. Some reviewers also note that the appellation is today making excellent Cru Bourgeois wines, which frequently offer good value. There are 3,404 acres of vineyards and a variety of soil types, from gravelly soil to soil with significant sand or clay. The two Second Growth Châteaux in St.-Estephe are Cos d’Estournel and Montrose. The Third Growth Calon-Ségur is widely admired. The principal grapes grown are Cabernet Sauvignon and Merlot, with small amounts of Cabernet Franc and Petit Verdot.