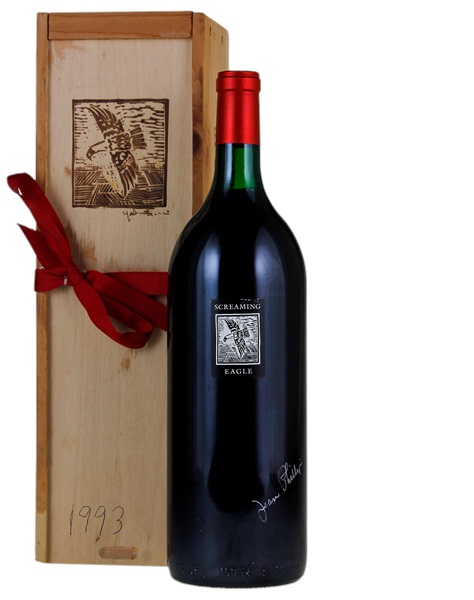 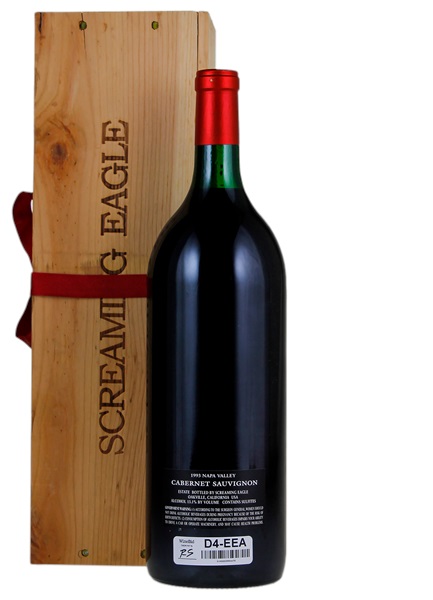 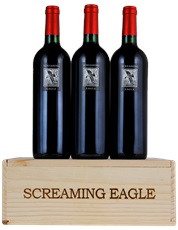 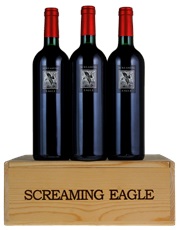 The wine offers a cascade of lavishly rich, opulently textured, super-extracted fruit that is beautifully buttressed by oak and sweet tannin. Remarkably long, pure, and rich, this is a compelling Cabe

Dark, ripe, intense and concentrated, with lots of currant, earth, leather and anise flavors. Comes across as a rustic, concentrated style with a chewy core of flavors.

Over the last 20 years, a small handful of California producers have solidified a reputation of highly coveted wines purchased by collectors the world over. Founded in 1986 by Jean Phillips, Screaming Eagle is one of these original cult wineries in California. Located in the Oakville AVA adjacent to Napa Valley’s famed Silverado Trail, the 57-acre estate was comprised of only 80 vines at the time that Philips shared some homemade Cabernet Sauvignon with winemaking peers at nearby Robert Mondavi Winery. Upon realizing the property’s potential to create top class wine for the Napa region, the name “Screaming Eagle” was born to signify Philips’ dedication to perfection. In recent years, the 2015-2016 vintages of Screaming Eagle wine scored perfect 100s from Wine Advocate, but its popularity dates as far back as 1995, winning rave reviews from such critics as Robert M. Parker Jr. for the 1992 vintage. This attention to the well-crafted, signature California-style wines created a passionate following. Then-winemaker Heidi Peterson Barrett was responsible for producing vintages so sought after that in order to buy Screaming Eagle wines, one must become a customer through a mailing list with a decades-long wait list to be accepted. As of 2010, current winemaker Nick Gislason has continued to produce top tier wines, maintaining Screaming Eagle’s reputation as one of the most revered producers in North America. This kind of popularity shaped the future of wine clubs, distribution, and wine collection within the industry. Like many of the wines produced in Napa Valley, Screaming Eagle wines are primarily Cabernet Sauvignon, though limited amounts of Sauvignon Blanc are produced. In 2012 the winery released Second Flight, a Cabernet Franc and Merlot blend. In 2006 Phillips sold the winery to businessman E. Stanley Kroenke, who continues to produce very limited quantities between 400 to 600 cases a year. Buy Screaming Eagle wine on WineBid today.

Napa Valley AVA is the most famous winemaking region in the United States and one of the most prestigious in the world. With nearly 43,000 acres of vineyards and more than 300 wineries, it is the heart of fine wine production in the United States. Winemaking started in Napa in 1838 when George C. Yount planted grapes and began producing wine commercially. Other winemaking pioneers followed in the late 19th century, including the founders of Charles Krug, Schramsberg, Inglenook and Beaulieu Vineyards. An infestation of phylloxera, an insect that attacks vine roots, and the onset of Prohibition nearly wiped out the nascent Napa wine industry in the early 20th century. But by the late 1950s and early 1960s Robert Mondavi and other visionaries were producing quality wines easily distinguishable from the mass-produced jug wines made in California’s Central Valley. Napa Valley’s AVA was established in 1983, and today there are 16 sub-appellations within the Napa Valley AVA. Many grapes grow well in Napa’s Mediterranean climate, but the region is best known for Cabernet Sauvignon. Chardonnay is also very successfully cultivated, and about 30% of the AVA’s acreage is planted to white grapes, with the majority of those grapes being Chardonnay,