ITEM 8389338 - Removed from a temperature and humidity controlled wine cellar 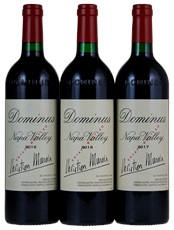 This impressive California Cabernet blend is Bordeaux-like in style, ripe and rich in flavor, with complex currant, earth, cherry and berry accented by plenty of spicy, peppery notes, and finishes with polished tannins. Best from 2001..

Dominus Estate is a California classic producer with a French winemaking pedigree. Founded and owned by Christian Moueix, whose family owns the legendary Chateau Petrus in Pomerol, France, Dominus Estate wines are shaped by Moueix’s education at the famed UC Davis viticulture and enology programs. Located in Yountville, CA in the Napa Valley AVA, Dominus Estate began in 1982 as a partnership between Moueix and the owners of Napanook Vineyard, Robin Lail and Marcia Daniel Smith, who were themselves the daughters of John Daniel Jr. Daniel was for many years owner of the much-admired Inglenook winery in Napa Valley. With an eye for classically styled wines embodying the Napa Valley, Moueix began producing Dominus Estates wines formally in 1984 and became the sole proprietor for both Dominus Estate and Napanook in 1995. Like other cult classic producers such as Opus One, Dominus was from the start an enterprise combining traditional Bordeaux winemaking techniques with Napa Valley terroir. One of the ways this was achieved is by utilizing the Napanook property itself, originally planted in the late 1850s when George Yount first began planting vines in Napa Valley. Today the winery is run by a team of French winemakers, and the wines are noted for, as wine critic Robert M. Parker Jr. has written, “their unmistakably French personality.” In addition to Dominus Estate, Moueix himself continues to oversee production for Pomerol’s Château La Fleur-Pétrus . Reflecting a traditionally Bordeaux makeup of varietals, the vineyards are planted to 80% Cabernet Sauvignon, 10% Cabernet Franc, 5% Merlot and 5% Petit Verdot. Some 85,000 bottles are produced annually. The estate’s second wine is Napanook to honor the land the estate was founded on. Buy Dominus Estate wine on WineBid today.

Yountville AVA is just west of Stags Leap and north of Oak Knoll. It is centered around the town of Yountville, named for George Yountville, who planted the area’s first vineyard in 1836. The district received appellation status in 1999 and it includes 4,000 vineyard acres. It is known for tannic Cabernet Sauvignon that has a reputation for aging well. Dominus Estate, formerly Napanook Vineyard, is one of the most prestigious producers in Yountville, and in all of Napa Valley.