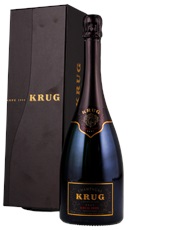 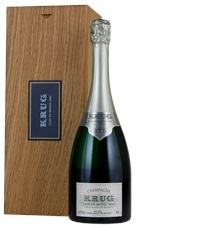 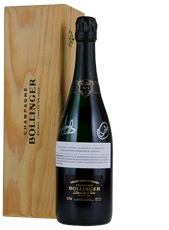 Rich, lush aromas of dried fruit and citrus marmalade, this is Champagne at its most opulent. Honeyed and round on the palate, with fine acidity keeping it focused. Gorgeous now, yet will age well.

Vinous, minerally nose dominated by toffee and apple. Mouthfilling, quite dry and very intensely flavored, with penetrating yet harmonious acidity. Offers the exotic fruit quality of the vintage but has the minerally, steely spine...

Located in Reims, the heart of France’s Champagne region, Krug was founded in 1843 by Johann-Joseph Krug, a German immigrant. Still operated by the Krug family, the house specializes in prestige cuvees in what is generally considered to be a traditional, elegant style. Krug Grand Cuvee, which accounts for about 75% of the house’s production, is generally made up of at least eight vintages and it is a blend of Pinot Noir, Pinot Meunier and Chardonnay. Krug Vintage Champagnes are admired for their ability to age and become more complex, and they are generally at least 10 years old before they are released. A Krug Vintage is typically 30-50% Pinot Noir, 18-28% Pinot Meunier and 30-40% Chardonnay. The house also makes a widely-admired Rose and Clos du Mesnil, which is 100% Chardonnay. The estate includes 49.4 acres of vineyard planted to Pinot Noir and Chardonnay. The vines on average are 15 years old. A total of about 100,000 bottles are produced each year.

Champagne is a small, beautiful wine growing region northeast of Paris whose famous name is misused a million times a day. As wine enthusiasts and all French people are well aware, only sparkling wines produced in Champagne from grapes grown in Champagne can be called Champagne. Sparkling wines produced anywhere else, including in other parts of France, must be called something besides Champagne. Champagne producers are justifiably protective of their wines and the prestige associated with true Champagne. Though the region was growing grapes and making wines in ancient times, it began specializing in sparkling wine in the 17th century, when a Benedictine monk named Dom Pierre Pérignon formulated a set guidelines to improve the quality of the local sparkling wines. Despite legends to the contrary, Dom Pérignon did not “invent” sparkling wine, but his rules about aggressive pruning, small yields and multiple pressings of the grapes were widely adopted, and by the 18th and 19th centuries Champagne had become the wine of choice in fashionable courts and palaces throughout Europe. Today there are 75,000 acres of vineyards in Champagne growing Pinot Noir, Chardonnay and Pinot Meunier. Champagne’s official appellation system classifies villages as Grand Cru or Premier Cru, though there are also many excellent Champagnes that simply carry the regional appellation. Along with well-known international Champagne houses there are numerous so-called “producer Champagnes,” meaning wines made by families who, usually for several or more generations, have worked their own vineyards and produced Champagne only from their own grapes.