ITEM 7966518 - Removed from a subterranean wine cellar; Obtained by inheritance 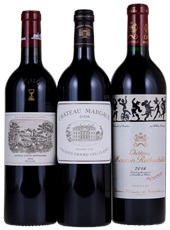 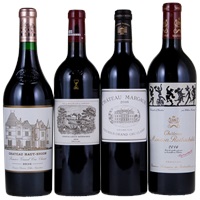 ...this medium ruby/garnet-colored wine displays a delicacy of fruit and sweet attack, but subtle, well-defined flavors ranging from tobacco, cigar box, cedar, and fruitcake. This is a savory, soft Lafite-Rothschild that is pleasing...

As one of the original four First Growth Bordeaux estates designated by the historic 1855 Bordeaux classification, Château Lafite-Rothschild wines remain some of the world’s most prestigious. One of the château's earliest and most celebrated fans was King Louis XV, who reportedly preferred to buy Château Lafite-Rothschild wine above all other wines. The winery’s reputation remains intact as one of the world’s leading Bordeaux producers. Located in Pauillac, one of Bordeaux’s four famous left bank communes, Château Lafite-Rothschild began gaining a reputation as a great winemaking estate in the 17th century after the vines were first planted on the estate in the late 1670s by Jacques de Ségur. The history of the château is deeply rooted in French winemaking lineage. Jacques de Ségur’s son Alexandre married the heiress of Château Latour and together they had a son, Nicolas-Alexandre de Ségur, linking the histories of both Lafite and Latour from the beginning of each estate’s founding. In the early 18th century, Bordeaux blends were wildly popular in London (known to British wine drinkers as “French clarets,” coining the term Bordeaux-style red wine blends still used today) with the prime minister Robert Walpole drinking a barrel of Lafite every three months. The château survived many significant periods in French history relatively unscathed and was eventually purchased in 1868 by Baron James de Rothschild. The estate has remained in the hands of the Rothschild family ever since. The term “lafite” is derived from “la hite,” or little hill in one of the regional dialects used in France in the Middle Ages. The domaines Baron de Rothschild also include Château Rieussec, Château L’Evangile, Château Duhart-Milon, and others in France and Argentina. Château Lafite-Rothschild includes 247.1 acres of vineyards planted in 70% Cabernet Sauvignon, 25% Merlot, 3% Cabernet Franc, and 2% Petit Verdot. The average age of the vines is 40 years. Annual production is 18,000 to 25,

Pauillac is Bordeaux’s most famous appellation, thanks to the fact that it is home to three of the region’s fabled first-growth châteaux, Lafite-Rothschild, Mouton-Rothschild and Latour. Perched on the left bank of the Gironde River north of the city of Bordeaux, Pauillac is centered around the commune of Pauillac and includes about 3,000 acres of vineyards. The Bordeaux classification of 1855 named 18 classified growths, including the three above mentioned First Growths. Cabernet Sauvignon is the principal grape grown, followed by Merlot. The soil is mostly sandy gravel mixed with marl and iron. Robert M. Parker Jr. has written that “the textbook Pauillac would tend to have a rich, full-bodied texture, a distinctive bouquet of black currants, licorice and cedary scents, and excellent aging potential.”